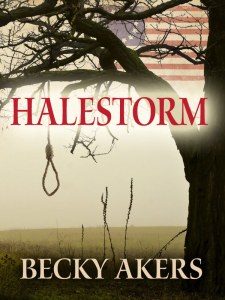 Thanks very much for your interest in Halestorm. My novel fictionalizes the dramatic, incredibly gripping story of Nathan Hale, the American Revolution’s most captivating spy.

Please contact me at libertatem[at]aol.com if the information below doesn’t answer your questions:

Handsome, brilliant, memorable: he was the wrong man for the wrong assignment. No wonder his first mission behind enemy lines was also his last. But from his failure came the hope and determination that eventually birthed a new nation.

Meet Nathan Hale, the most endearing hero of the American Revolution. Halestorm presents the true—well, mostly true; OK, partially true—story of the legendary 21-year-old spy who hanged after regretting he had only one life to give for his country. Forced to choose between love and honor, Nathan’s decision determines not only his own fate but that of the war itself.

Filled with love and conflict, murder and betrayal, Halestorm stirs our deepest emotions as it transports readers to the exotic world of Revolutionary America.

Becky Akers is a free-lance writer and historian whose work has appeared in the Christian Science Monitor, the Washington Post, Barron’s, the New York Post, American History Magazine, the Independent Review, Military History Magazine, the Ottawa Citizen, lewrockwell.com, forbes.com and many other publications and websites. Halestorm is her first novel and only child — so far. She expects a brother to join Halestorm in the autumn of 2013. Abducting Arnold ought to earn her plenty of enemies since it defends — no, positively praises Benedict Arnold while telling the true tale of his treason.

Need a topic or an idea for a feature?

The American Revolution in general and Halestorm in particular speak loudly to the debates in today’s headlines. News-pegs abound. Whether it’s gun-control, the War on Terror, security vs. liberty, or New Age philosophies, I can help you connect historical events to current news:

What really happened at Lexington and Concord and what does it tell us about contemporary gun-control?

The government claims it must search all passengers at airports to protect aviation. If Nathan Hale were alive today, would the TSA employ him to design its “security protocols”?

Nathan Hale’s great-grandparents prominently figured in the Salem Witch Trials. Would he sympathize with modern Wiccans? What would he say about these and other groups as they press for various rights?

Contact me at libertatem[at]aol.com for other ideas on articles that bridge the chasm between Halestorm’s world and ours.

Hunting an anniversary to commemorate?

August 27-28 [1776] — Battle of Brooklyn. First formal battle between the British Redcoats and the Continental (American) Army under George Washington. The Redcoats handily win with classic strategy and vastly superior numbers.

Contact me at libertatem[at]aol.com for intriguing tidbits to spice up your stories on these events or for additional anniversaries.

“…it was so exciting that toward the end, I couldn’t put it down and ended up reading until I had finished it in the middle of the night. It is not often these days that I do that!…” Rebecca Jaxon

“The story has such beautiful prose and cadence…”  Vaughn Kraft

“I could not put it down.” Audrey Capozzi

“I loved Halestorm. It kept me glued to my Kindle from page 1 to the end.” Mike in Fredericksburg

“I’ve always enjoyed the jabbing wit as well as the author’s strong, courageous viewpoint so when I read that she had released her first novel, I had it on my Kindle that very day and was reading it that night. I highly recommend it.” Karin Christensen

“You’ve got to admire the moxie of a debut novelist who in her own voice calls John Adams and Alexander Hamilton ‘pompous twits.'” Kashin

“This book is marvellllous! I loved every minute of reading it…” John McMullan

“I couldn’t put it down ’till I was finished.” Dixie

“…buy Halestorm for yourself and your children, grandchildren, nieces and nephews. Read it and encourage them to read it. If ever a generation needed a hero, it is this one.” Kathleen M. Sheridan

“For a first novel, Ms. Akers has hit a home-run. A spellbinding tale set in a well researched historical context … Aside from keeping me awake much later than usual for several nights, I have nothing but kudos for this book, and am hoping Ms. Akers is busy researching her next good read.” JVC

“…the story is so compelling that the last hundred pages go by like a house afire!
You won’t want to put Halestorm down as you are quickly transported into its world of 18th-century values and conflicts. I enthusiastically recommend this exciting new novel!” Neil

Sample Halestorm for Yourself

Add Halestorm to Your Bookshelf at Goodreads